Well, the home stretch is here. Which is good, because I think my stomach is running out of room, and my clothes are running out of room for my stomach. I was at church last week, and during the singing, a small child tried to peek under my shirt, which of course was dangling about 2 feet in front of my body.

At the 30 weeks' ultrasound last Wednesday, the babies weighed almost 3 and 1/2 pounds each. This is a reasonable explanation for my massive belly, although it isn't really comforting to think of how much bigger they will get before they are done... It also means that I need to find a way to exchange the preemie-size clothes I've been given, since they only fit babies up to five pounds.

They are also both in the breech position right now, meaning that their little feeties are standing on my bladder and their heads are shoved under my ribs. (This may help explain why the top of my abdomen has been numb for weeks.) For the uninitiated, breech is NOT a good way to be born, especially not for twins. Ideally, they would both be head-down, or baby A would be head-down and baby B would be sideways-but-leaning-sort-of-head-down. They still have time to move, but that time is running out. I have one more ultrasound on May 6 to check their growth--if they are still breech then, it's a c-section for me for sure!

And that brings me to the next topic: baby eviction. Apparently twins at 37 weeks are considered about as mature as singletons at 40 weeks (full term). In other words, there's not really much benefit in their staying in longer than that--in fact, chances start to go up from there for other complications. So I won't be allowed to go past 38ish weeks. Either I will have a scheduled c-section if the babies don't flip, or they will induce labor if they do flip.

...Which brings me to my next idea. Anybody want to guess when the babies will get here? For reference, it will probably be between May 22 (37 weeks) and June 5 (39 weeks). Of course, there is still the chance we won't even make it that far. And just to be fun, we can guess how big they will be too. So post your guesses in the comments section, and the winner will get... well, the satisfaction of being right, I guess. And some leftover Easter candy if I don't eat it all. :)
Posted by Hewittfolks at 5:39 PM 4 comments:

It's amazing how, in a handful of months, your perspective can utterly change. I was thinking today about "where" I was a year ago. At this point last year, Scott had just been able to move up from Madisonville. I was working feverishly on collecting data for my dissertation, and utterly terrified that I would never get done. A few short months after that, I conquered the thing, and five years of stressful anticipation and anxiety somehow disappeared without fanfare.
And then came the dangerous idea to think about having kids.
And then came the positive pregnancy test.
And then came the fateful day with two weird blobs on the ultrasound screen. Two weird blobs with strong heartbeats and the capacity to knock all the wind out of me.
Everything changed SO fast. And everything has changed so much SINCE then. I could count out weeks and months a dozen different ways to show it, but it would probably get pretty tiresome to everybody but myself. All I know is, I am having twins in a very short time, and it doesn't sound strange at all.
(Now, don't get confused and take that to mean I feel prepared for this. I absolutely don't. Just... not surprised anymore.)
Another weird thing that has changed is my opinion of my own body, right down to my "gorgeous" cervix. I guess I've always had fairly normal levels of self-unsatisfied-ness. Too tall. Too big-boned. Too "fluffy". But it's been amazing how that perspective has changed too. I can watch numbers on the scale go up and feel nothing more than a detached, scientific interest in how appropriate they are. My ankles are quickly disappearing as they mesh with my swollen feet, but as long as I can wear comfortable shoes, I find the phenomenon little more than curious. But the weirdest thing is a sense of pride for this bigger-than-average body that I've always been a little uncomfortable in. No doubt if I had been some skinny waiflike little thing, a twin pregnancy would be a lot harder to deal with right now. But even at this point my body treats two extra people as a minor inconvenience. I'm not hugely uncomfortable, hungry, nauseous, faint, or anything else. My blood sugar and iron are consistently good. And apparently my larger frame is better for hiding babies, because I don't appear to be looking uncomfortably huge yet--unlike some pictures of other twin mamas I've seen.
Anyway, speaking of the body and the belly, here are a couple more pictures for you non-facebookers...
28 weeks: 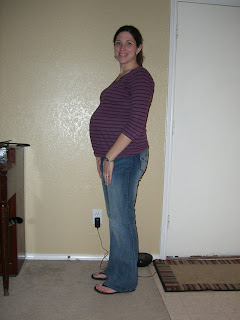 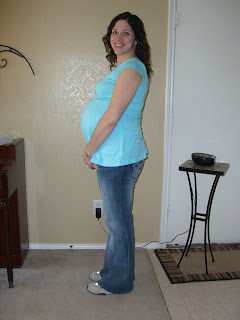 Posted by Hewittfolks at 5:47 PM 2 comments: