on hitting a milestone

I don't think I've gone into detail about it here, but lately I've been having appointments with a specialist every 2 weeks for the past 6 weeks. He told me that, since the biggest danger with multiple pregnancies is preterm labor, he would be doing a cervical check every 2 weeks until I hit 24 weeks, and also doing a swab for some sort of labor-related protein at 24 weeks. (Sorry if this is a little TMI, but such is the business of pregnancy and babies.) If my cervix stayed longer than 1 inch AND there was no sign of that protein, I would have about a 2-3% chance of going into labor before 32 weeks (2 months early). If things got too short down there and the protein WAS present, I would have a 50-60% chance of going into labor before 32 weeks.

So anyway, this past Thursday was the long-awaited 24 weeks appointment. My cervix had been eliciting compliments from the specialist such as "beautiful!" and "gorgeous!" (which is weird to hear, but reassuring), and this week was no exception--it is still plenty long. And I got a call yesterday that the test for that protein was also negative. So... no bed rest for me, at least not yet! And no cerclage, thank heavens. That's where they actually sew the cervix shut to prevent premature labor. ICK!! I had never heard of such a procedure, and I'm glad I won't have to experience it.

On top of that, hitting 24 weeks is something of a milestone in itself, because about half the babies born at this point will survive. (It's somwhere around half, anyway, depending on which study comes up in my searches.) And the rates go up dramatically from this point, until about 90% survive at 29 weeks. So not only am I very unlikely to pop these kiddos out super early, at this point they should make it even if I do go into labor.

And let's just take a moment to pause and consider how strange is the fact that I could produce actual live, viable babies right at this very moment. I'm not sure I'm ready for that idea yet. Luckily, I should have some more time to adjust!

And without further ado, I will now introduce our entertainment for the evening: Starring as themselves, I give you.... Baby A and Baby B!!! (Otherwise known as Pebbles and Bam-Bam.)

Posted by Hewittfolks at 6:41 PM 2 comments:

on the weirdness of it all

So the process of making people is a very weird thing. I mean, seriously--all "ooh-ing" and "aah-ing" aside, it's strange! People are forming. In my stomach! It's like something out of the X-Files or that Alien movie. They are forming, and growing, and drinking their own pee.

And they are moving. I don't know if it's stranger to feel them move, or the fact that for several months I didn't feel them move! I mean, there were substantial little creatures in there kicking around all over the place, week after week, and I didn't feel a thing. But now that I do feel them, that's odd too, of course. I don't know about all the people who say it feels like butterflies in your stomach. (These may be the same people who talk about how beautiful their babies are the moment they first see them, and neglect to mention that they are covered in blood, mucus, and poo.) Mine do not feel like butterflies. They feel like salamanders. Squiggling in muck. Now that they are bigger, they feel like... big salamanders. Or maybe medium-sized fish flopping around, I dunno. Not butterflies though. And most of the time when they start moving, the sensation catches me off guard, and my first thought is inevitably that I need to go to the bathroom NOW, because my stomach is churning and something is going to be coming out of one end or the other. It takes me a split second to figure out that it is only my (darling, adorable) children that are masquerading as nausea and/or diarrhea. But it makes the whole babies-moving thing a little less than pleasant at times. Perhaps I am a bad mommy, but there it is.

Oh, and speaking of weird and babies moving, today I SAW my stomach MOVE for the first time. WEEEEEEIIIRD!! It is completely the strangest thing in the world--X-Files and Alien all over again.

And then there is the more profound and existential weirdness, when I consider that these really aren't salamanders or fish, or even aliens. I can almost imagine them as babies now, when I'm feeling particularly enlightened. But to think that someday they will be children. Children who think, who talk...! Who become teenagers! And ADULTS!! It's ridiculous, absolutely surreal, and completely terrifying. No wonder parents always talk about feeling overwhelmed! Who decided it was a good idea to give me this much responsibility?**

Anyway, enough reflecting for now, I suppose. Our nursery is currently taking shape, complete with a (comfy and wonderful) glider, dresser/changing table, and two cribs. It's not as strange as I thought it would be to see the cribs all set up and waiting. I'm not sure why. Perhaps at some level I'm actually adjusting to the idea of parenthood! I have two doctor's appointments this week (!!!), and at the second one they will check my cervical length and some sort of protein, which should tell us my chances of staying pregnant till at least 32 weeks. (That seems to be sort of a magic point, past which the outlook is very good. Twins mature a bit faster than single babies--singletons, they're called--and 37-38 weeks is often the same as 40 weeks for a singleton pregnancy.) They will also do another ultrasound to check the babies' growth, so we should have another video to post soon if Scott is feeling up to some editing! Suggestions on songs for the soundtrack are appreciated!

**By the way, I don't mean to sound overly negative about this whole pregnancy. My sister told me today that I am slowly sucking all the joy out of her expectations for being pregnant, which made me feel kind of bad. I'm just not a gushy sort of person, I guess. But perhaps once the babies are here, I will be telling everyone how beautiful they were the moment I saw them, and forget all about mentioning the blood and poo. Perhaps.

on growing a belly

Ah, the pregnant belly. I remember long ago when I wasn't really showing, when it seemed to be taking forever for my stomach to look even the smallest bit bigger. Or maybe it was yesterday... It seems like in a matter of hours, I have gone from modestly thick about the middle to very obviously pregnant. I just outgrew my first pair of pants... MATERNITY pants, and I think I have a couple of MATERNITY shirts that are not going to be long behind them.
It's just getting obscene. When I try to sit up out of bed... I can't! I literally have no abdominal strength whatsoever. I like to lie with my legs across Scott's lap on the couch, and the other day I had to heave them up there one at a time, and it was hard! Small children are starting to announce my pregnancy to me. One girl was optimistic that "maybe you'll have ten babies, like that lady on the news!" Thanks, kid. That helps.
I've never once eaten 3,000 daily calories as I've been instructed, but I'm still gaining weight at what seems to me an alarming pace. It shouldn't bother me too much longer though--I figure I've only got another week or two before I can't see the numbers on the scale anyway. And how in the world did I ever reach my feet? I broke down and bought a pair of velcro tennis shoes yesterday... and I'm so excited! Tying laces was getting painful...
And it's only going to get much, much worse, this I know. There are galleries of pregnant twin bellies that scare the bejeebers out of me. Here are a couple of my "favorites": 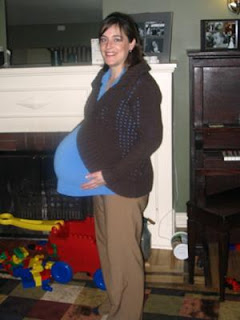 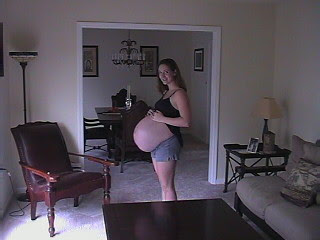 I'm sure I'll have my own freak-show belly pictures before long. Pregnancy is SO weird.