keeping up is hard to do

For any of you who have been worried, I am not dead. Just busy. I usually update on the weekends, which works... most of the time. But when we have a string of FIVE WEEKENDS where we are out of town or visiting friends who came from out of town... well, blogs take a backseat. So to all of you in the backseat, hang on a few more weeks. We'll be home soon.
Posted by Hewittfolks at 11:18 PM No comments:

We got the babies some foam letters for bathtime. They are supposed to stick to the walls of the bathtub, but they have the added bonus of sticking to babies as well: 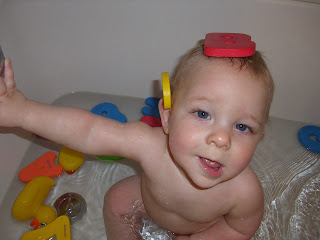 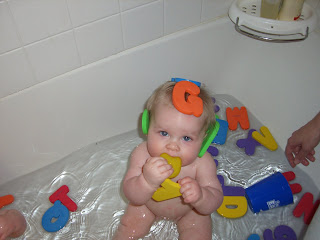 Noah wants to pull up on EVERYTHING these days. He almost drowned twice (okay, not really, but HE thought so) a couple days ago, trying to do all his new activities in the tub. Even with that trauma, I'm not sure if he's convinced he should reserve crawling and pulling up for doing on dry land only. 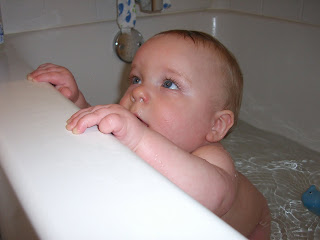 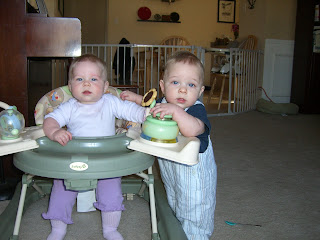 Posted by Hewittfolks at 9:24 AM 3 comments:

It feels like every time the babies learn something new, it's my favorite thing in the world. It seems so trite and cliche to say it, but it's unbelievably amazing how quickly they learn. (Note: There are times when it does NOT feel like a baby is learning quickly. Every single day, in fact. Like when they need attention and entertainment every stinking second for HOURS. But I digress...)

Lately, the kiddos have become ...what should I call it? Detail-oriented? I don't think they're seeing anything new, necessarily, but lately they can't see the forest for the trees. You sit Noah in his high chair and he immediately grabs for the little strap to chew. I pick Lily up and she wastes no time before grabbing for the zipper on my sweatshirt. Scott came home unexpectedly this evening after going to work, so he bent over the babies as they played on the floor. Their reaction? Not smiles or squeals. Just grabbing for his badge!

My latest favorite thing involves this detail stuff, combined with the fact that Lily has learned to make a pointer finger. I thought I had heard that pointing was more of a toddler skill, so I've been pleasantly surprised to see her teensy little finger poking out at lots of things. She tries to use her little pointer finger to turn off light switches, push buttons, and touch the kitty. Today she tried to stick it up my nose. (Hasn't discovered hers yet.)

She's also been using it to point at stuff in books--mostly kind of randomly, not at the same stuff, and not consistently. But tonight while reading Goodnight Moon, I noticed a pattern. She apparently is very conscious of the red balloon that appears on most of the pictures. For those of you who can't quote the book and/or reproduce every drawing from memory, here's what I'm talking about:

As soon as the page turns, she IMMEDIATELY points to the balloon. Nothing else. On the pages without a balloon, she doesn't point to anything. She doesn't seem to be anticipating it--doesn't get excited, and sometimes looks away while I'm reading. Oh--and then there's the fact that both babies LOVE to turn the pages, so they get pretty distracted while they wrestle each other to grab for the next page. But never fear--Lily never misses a balloon. It's the cutest thing I've ever seen.
Until the next discovery trumps it, of course...
Posted by Hewittfolks at 7:41 PM 1 comment: