If x is equal to a baby's normal speed,

In other words, the baby goes faster as he gets closer to the pool, and even faster as Mommy runs after him.
Solving for y, y = 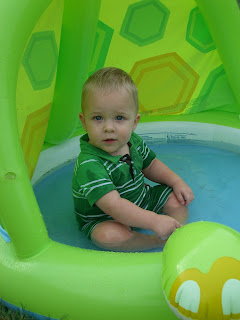 Posted by Hewittfolks at 8:25 PM No comments:

oh where, oh where did my babies go?

I realized recently that I still think of Noah and Lily as being just barely out of babyhood. But apparently I blinked, because they're not. They're FIFTEEN MONTHS old! A quarter of a year, gone in an instant.

They're both "officially" toddlers now--Noah walks around as if he's never done anything else, and Lily can make it across the room without a problem. Along with this new mobility, their attention span is completely out the window. We rarely make it through an entire board book these days, let alone a half-hour DVD. Excursions out of the house have become an ongoing dog-and-pony show, with Mommy as the star attraction. We point out hats, we sing songs, we look for babies--and that's just in the frozen food section of Wal-Mart.

At home it's a little better, mostly because we have baby gates and it's easier to contain the madness.

It sounds tiring (and it is), but it's fun too. Major accomplishments are made every day. Things like First Successful Climb Onto the Coffee Table and First Time Closing the Drawer Without Squishing Fingers happen all the time. They're still using signs like crazy, with over 3 dozen signs each. Lily has said a few words lately too--"cracker" and "banana", and I think she's trying to say "diaper" and "shoe".

In the evenings after dinner, the backyard has cooled down enough for us to go and play before bathtime. As soon as I say the word "outside", Lily and Noah start a mad, shreiking scramble for the back door as if the house is on fire. I'm not sure why a 100-degree backyard, complete with poky, half-dead grass and scattered dog poo holds such an appeal. But it does. It will be nice when things cool down a little bit and we can spend some true quality time outdoors.

In other news, the babies' 15 month appointment was today. Noah weighs almost 25 lbs and Lily is almost 23. The fact that they've gained 4 lbs in the past 3 months isn't really a shock, given the fact that they've gone through 2 sizes of clothing this summer alone. One surprise: Lily has a heart murmur! The doctor wasn't concerned and said it was a small, benign murmur that she'll most likely outgrow as she gets older. Maybe it happened one of the times that Noah stepped on her in pursuit of a toy.

Posted by Hewittfolks at 2:06 PM No comments:

hard to go back

Now that my summer break is over, today was Lily and Noah's first day back at Lisa's for babysitting while Scott and I both worked. I took them over a little early this morning so that I could stay a few minutes to help them get re-acclimated.

No dice, though. They started screaming as soon as we got in the door.

Nine hours later, they had taken a measly 45 minute nap, eaten very little, and cried most of the day. Oh, and Noah leaked nasty diarrhea through his diaper as soon as I picked him up.

And were they happy to get home with Mommy and Daddy? If happy means screaming, crying, and throwing fits, then yes. They were absolutely tickled to death.

And we get to do it again tomorrow.