n. the grasping of an object between the thumb and forefinger. The ability to perform this task is a milestone of fine motor development in infants, usually occurring between 9 and 12 months of age. 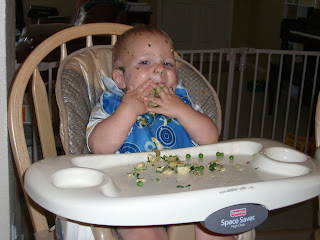 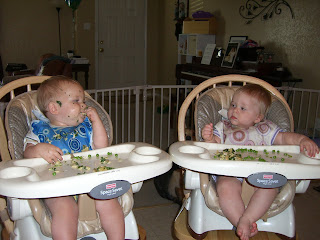 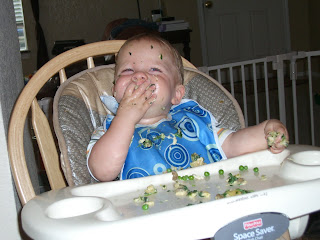 Posted by Hewittfolks at 4:49 PM 3 comments:

who are these short people living in my house?

Remember all those times when I thought Noah and Lily were changing and growing quickly? I was wrong. Absolutely wrong.

Well not wrong, per se, but the amount of changing they've been doing lately puts all those other times to shame. I literally have different beings in my house than I did last month.

And no, they haven't started walking (although Noah is absolutely capable) or talking. But they are definitely different. For one thing, all of a sudden they show preferences, make choices, and communicate those desires. Gone are the days when I could just plunk any food in front of them at lunchtime and expect them to unquestioningly accept it. They make point and grab gestures to everything else on the table, especially Mommy's food and drink. And after a few repetitions, they usually seem to understand that they can't have it. (And then I hide it. Because understanding doesn't mean accepting.)

Just a few minutes ago, I was cleaning up the kitchen when I realized I couldn't hear the TV anymore. (We don't usually keep it on when the babies are awake, but Daddy had been catching up on soccer.) I looked into the living room to see the TV blank with some unrecognizable setting on the screen. And Noah looked at me innocently, holding the remote to his ear as if it was a telephone. It was too cute for me to get upset, even though remotes are off-limits. So then I took the remote and proceeded to get the TV back from never-never land. When I finished and looked up, Noah was sitting patiently on the floor and watching the TV. He then pointed at it, grunted, and looked at me. And then I realized that he thought, since I was doing things with the remote, that it was "movie time"--and he was all set! Again, too cute for me to resist, so they're now watching a sign language DVD.

Speaking of sign language, there's another area where the twins have exploded. Before their birthday a month ago, they could sign "more", and Lily was beginning to pick up "milk". Now, they also do eat, bath, please, hat, dog, ball, and baby. A lot of these are not super consistent, and there are a couple that they don't both do. But they're beginning to generalize and use them out of context, which is really exciting. They've also learned several body parts in the past month: they now know tongue, hair, head, nose, ear, and bellybutton. It's ridiculous.

I have a couple videos I want to put up, but I think I'll do them a little later...
Posted by Hewittfolks at 1:05 PM No comments:

the wild jungles of suburbia

I may never go out in the backyard at night again. A couple hours ago I found a (small) snake eating a (huge) toad. There was blood. It was very ick.

A few minutes ago I went out with the flashlight to make sure the snake-toad ensemble had cleared out before I let the dogs have access to the yard again. During my (squeamish) search, I inadvertently rediscovered a trick they taught me in third grade. Namely, how to use a flashlight to find spiders. The light reflects back off their spidery eyes as bright blue little glints of light.

There were a LOT of little blue glints. I tracked down a couple of the closest ones, and they belonged to massive wolf spiders. They tried to eat my toes, but I was already running away from the snake and the bloody toad, so they didn't catch me.
Posted by Hewittfolks at 11:32 PM 3 comments:

hair and side effects

As the baby-toddlers' hair has gotten longer, we have had to figure out things to do with it. For those of you tuning in via pictures only, it probably looks like they both have the same type of hair. Au contraire, my friends. While they do seem to sport almost identical hair colors (Lily's is a touch darker), everything else is different. Noah's hair has curls; Lily's is straight (though it is beginning to curl at the ends). Noah's is sikly and shiny; Lily's is fuzzy and wispy. And though it is less obvious now, Noah's hair grew in mohawk-first, and Lily's was an even length all over her head.


Anyway, despite his curls, Noah's hair had been getting on my nerves for some time now. It was just a little too shaggy. But I was afraid of him looking too grown up too early, so we waited until recently to cut it. And so, just after the birthday party a couple weeks ago, with both grandmothers on hand (both experienced hair-cutters), Noah got his ears lowered. He did pretty well--sat fairly still and endured quite a bit of head-handling. (Thank goodness for Baby Einstein videos...) 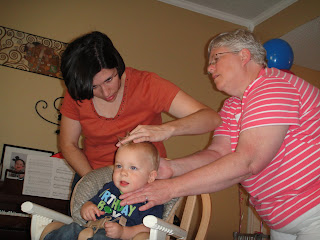 And here's my big boy with his new grown-up haircut! 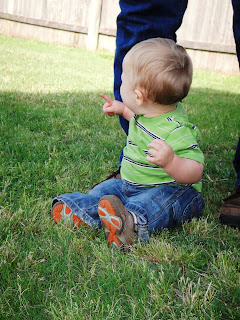 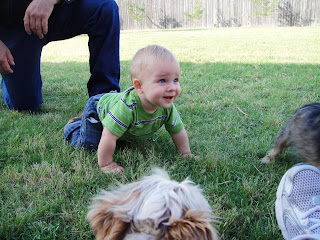 Not to be outdone, Lily is also changing up her 'do. She finally has long enough hair to manage vague impressions of ponytails. She HATES me messing with her hair, as I have to pull it a bit to keep it together. And it's all for nothing, because the ponytails stay in for approximately 8 seconds. Long enough to snap a couple pictures, anyway... 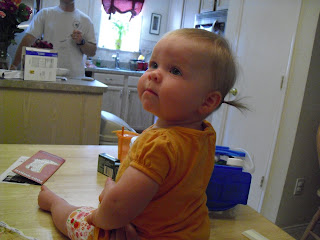 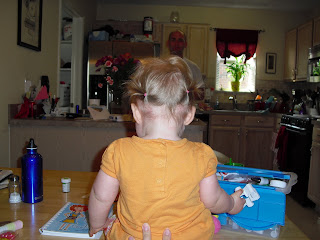 In other news, my children are gaining skills by leaps and bounds. They've gotten to the point where they can imitate me (and each other) fairly easily, which is fun. They point to some body parts and to several other objects. Unfortunately, this new awareness and skill acquisition has some unfortunate side effects. Cases in point:

Posted by Hewittfolks at 3:26 PM No comments: