The babies are 75% of the way through their first year. They are closer to toddlers than newborns, my chunky little muffins.

Speaking of chunky, Noah is still heavier than Lily, at 19 lbs versus her 17.5. BUT. Her thighs are fatter. And her arms have more rolls. Poor thing. I've had to put away some pants and shirts that she SHOULD have just gotten big enough to wear, because they look like sausage casings on her poor little limbs. Oddly enough, she is now officially on the growth charts for height, while Noah is still dangling somewhere below the fifth percentile.

And speaking of muffins... I like muffins. Mmm, muffins.
Noah surprised me (and probably himself) this morning by going vertical. I put him in the play yard as I generally do in the mornings, and took Lily next door to be babysat. When I came back, he had pulled himself into a standing position! I was so shocked I snatched him up like I was saving him from the brink of death. And then I realized that he had just been making some really excited noises, and that he was probably super proud of himself for this first-time accomplishment! So then I felt bad and tried to congratulate him, but his goldfish memory had already lost the thought. I'll just have to try to remember to give him some good applause the NEXT time he freaks me out.
Lily still thinks all things related to crawling and walking are utterly unworthy of her attention. Instead, she babbles like a teensy little maniac. So far, she says "da-da" (often during nursing sessions, which is weird...) and "ma-ma". And all kinds of other sounds, which mostly degenerate into spitting noises when she is frustrated. Lately she is sickly, so I'm waiting to see if today's fever hangs out till tomorrow and merits a call to the doctor. Once today when I set her down, she whimpered pathetically, looked up at me, and said "Mama!" as one shiny tear slid down her flushed little cheek. Tell me again why I wanted her to be able to talk to me? So she could BREAK MY HEART???
And now some pictures. Granddad introduced Lily to the wonders of the iPhone during their recent visit: 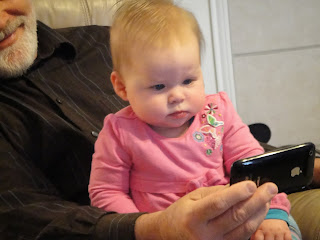 I thought we'd make it till she was at least 10 before she started asking for a cell phone, but that may be wishful thinking.
Noah taking a bath: (And yes, I chose this picture because the strategically-placed dolphin made me giggle my head off.) 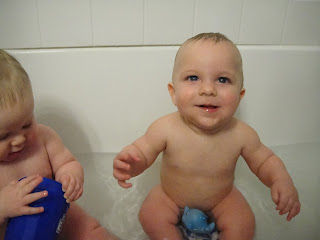 My little Lily, ready for bed: 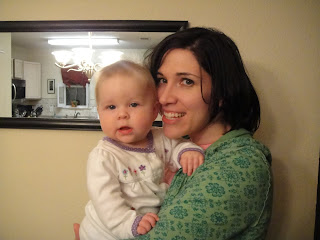 And Noah, showing off his "standing", complete with the Grip of Death on that little activity table. 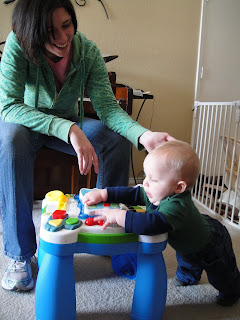 Posted by Hewittfolks at 8:23 PM No comments:

because I am lazy

... and because it is late, I'm going to just post a link to the pictures I just put on facebook. I'll write later...

a handful of firsts

Time has been flying by here at the Hewitt house. Lose track for a day, and you never know what you'll see when you turn around again.

Scott left for an inservice training in Austin and was gone for 4 days. It was his first time being away from the babies for more than a handful of hours. Which was weird for him, but not really weird for me, since sometimes our opposite shifts mean we don't see each other for a few days at a time.

The babies were very glad to see him again--Noah busted a big grin on sight, and kept grinning every time Scott came around a corner, as if he reassured that Daddy hadn't left town once again. Lily was a little skeptical, and had to do some closer inspection to make sure he was really Daddy: 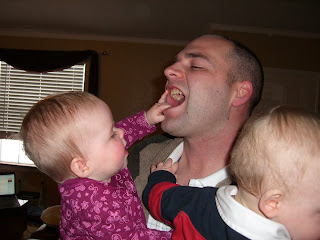 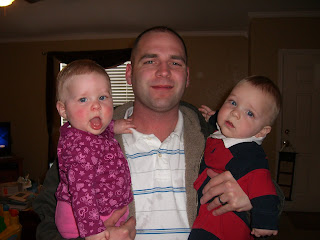 After a short reprieve from illness, the babies wound up sharing a cold this past week. Lily caught it first and has borne it beautifully. Today I wiped her nose and found that her skin was raw and cracked from so many wipings--but she didn't fuss at all! She really has become a happy, independent, tolerant little girl. Here she is at the height of her cold, with matching shirt, bib, cheeks, and even the food on her face: 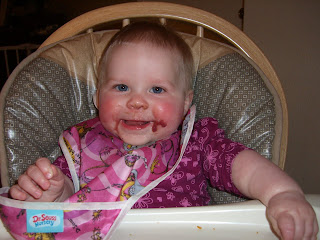 Like everyone else here in North Texas, we got a bunch of snow last week. The official count in Fort Worth was 12 inches, but I think we got closer to 8 inches or so. It was wet, heavy snow that stuck to everything, and it was absolutely gorgeous. I had forgotten how beautiful, still, and peaceful the world becomes when it's covered with a good blanket of snow. 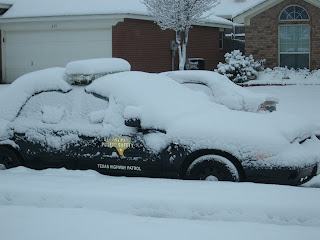 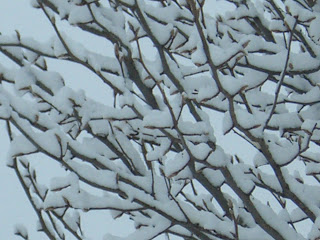 And then there are the teeth. Noah has two, Lily has one (just barely), and both of them have toothy bumps. Noah's upper gum is so swollen and sore he won't let anybody near it without screaming his head off. Poor babies! They still seem to be handling it like champs, though--aside from a little fussiness and enough drool to fill a swimming pool.

In other very exciting news, the babies have both "said" their first "words"! Okay, so I had to put quotations there because there's a little explanation necessary. Lily has officially said "da-da" several times, and there is an outside possibility she has some idea what it means. Of course, she has also said "ga-ga" and "ba-ba" and a few other things, so who knows. The most exciting thing is that she has figured out how to repeat "da-da" when we say it to her. (Same goes for spitting.)

Noah hasn't vocalized anything specific yet, but he has mastered the sign for "more". (Not exactly shocking that the fat kid is the first to figure out how to insist he gets fed, and NOW.) He figured out how to "clap" (bring his hands together) at the babysitter's. Since that's pretty close to the sign for "more", I took it and ran. From there it wasn't too hard to teach him how to ask for more food--I think Noah would learn to fly if there was food involved. Now he asks for "more" in between every. single. bite of food sometimes, and sometimes when there is no food anywhere around. (But if it's not time for food, I just pretend I think he's clapping and say, "Yay!!" Poor hungry kid...)

Here's a sampling of his new talent:

Posted by Hewittfolks at 3:23 PM No comments:

So as it turns out, babies cry a lot. More than that, they cry at some fairly random things.
Case in point: puppets. If you read my last post, you know that my babies are absolutely in love with Baby Einstein puppets. Trying to capitalize on this new love affair, Scott made a sock puppet to entertain our little darlings. The only problem is, it makes them scream in agony. I can't imagine why it would be scary, can you: 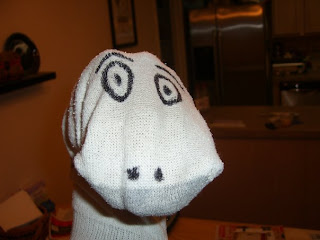 Other things that make babies (especially Noah) cry include: food processors, roaring noises (we have to be careful when providing sound effects for books), and not being held or fed RIGHT NOW.