I believe we have sufficiently answered the question: "Why did it take them so long to invent colored bubbles? 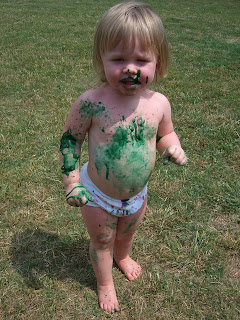 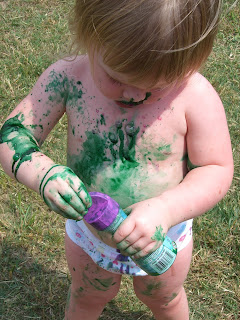 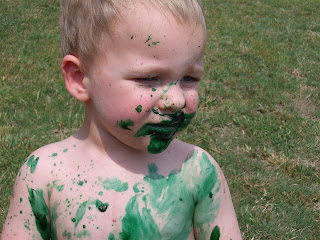 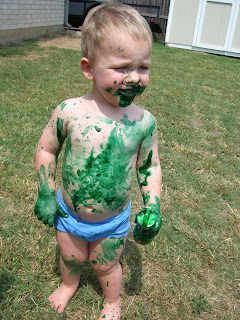 Posted by Hewittfolks at 12:35 PM No comments:

April is for backtracking

I was organizing some pictures tonight, and realized I hadn't posted any pictures to the blog in quite a while... oops. Wouldn't everybody rather read my semi-morose ramblings than look at pictures of cute kiddos? Obviously.


But in case you're bored, here are some pictures as well:

We got to see Gemma and Granddad for a little while a couple weeks ago, down in Bastrop. There's a park there, with a lively (and cracker-loving) waterfowl population. 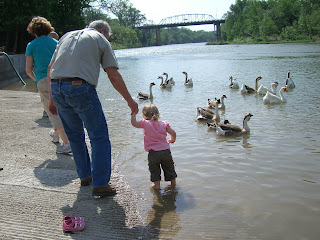 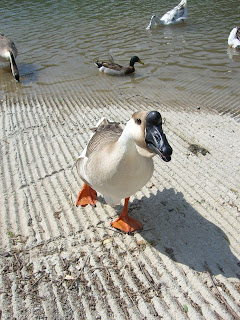 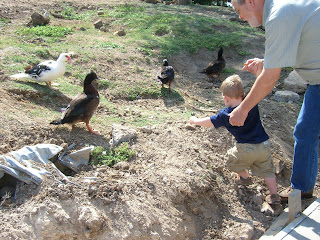 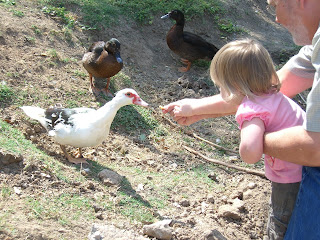 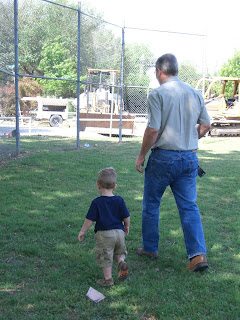 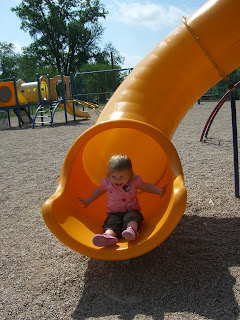 On the way home, we found an awesome bluebonnet field, where we got the picture at the top of the blog (obviously). We were lucky to get just one picture--the kids weren't really enthused about photography. We got a couple good shots, and then had to convince them there was a bunny hiding in the flowers to make them look interested. 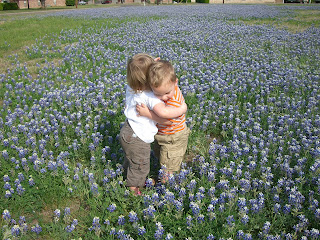 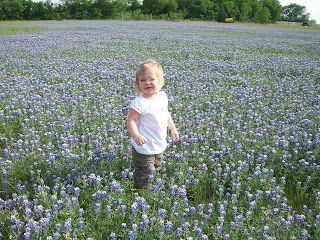 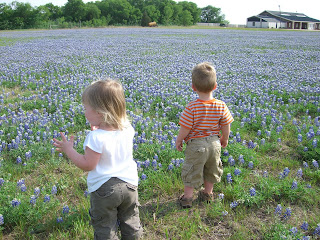 Grandma sent the kids a box full of Easter-y goodies. Including an outfit with matching hat (guess which part was Lily's favorite), and some punch balloons. The balloons were an instant hit: 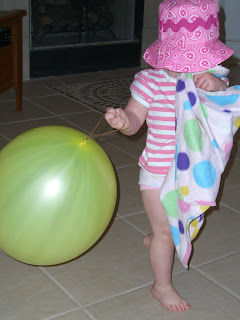 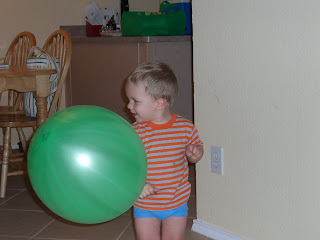 My college roommate Laura and her family came to visit from Illinois. They didn't come to visit me, necessarily, but since they were only an hour away visiting Laura's sister Shawna and her new baby Trey, we spent some time with them. We went to a community easter egg hunt, which was fun--if a bit hot and humid. I was careful not to point out that there was candy in the eggs until the hunt was over--otherwise I'm sure they would have stopped after the first egg! 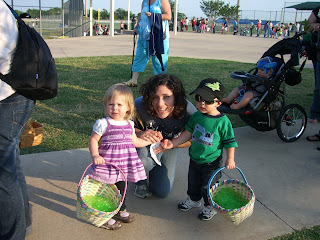 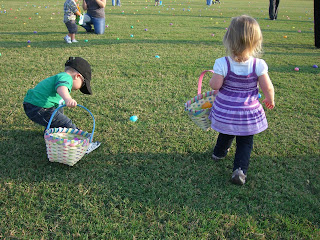 Posted by Hewittfolks at 10:21 PM No comments:

Okay, I gotta write down some things before I forget them:

We have a couple of "boo-boo bunnies" --cloth ice cube holders for putting on ouchies. Back in my naive, early-mom days, I thought that we'd be using them all the time by now, but I was wrong. Ever tried to get a toddler to hold an ice pack to a boo-boo? It doesn't happen. They want to hold it and play with it, and leave it somewhere for the dog to chew its ears off. But we're getting there, so when Noah fell the other day and hit his ear hard enough against the railing of the porch that it began to swell, I got out the bunny.

Noah wasn't all too interested in holding it to his ear, as usual. But Lily was fiercely jealous, and started demanding, "Boo-boo baa-ey! Boo-boo baa-ey!" I told her she could have the bunny sometime later, when she got a boo-boo.

Hearing this, Lily sprang up from the porch step, ran over to the railing, and bashed her head (gently, but with gusto) against the wood. The look on her face as she braced for impact is something I hope I remember forever. She was none too pleased when I still denied her the bunny, even after such self-sacrifice!

Both kids want to be just like us, and that is especially true of Daddy. Since he has been exercising a lot at home lately, they have seen him do a lot of workouts at home. Watching Noah try and jump over a jumprope is completely hysterical--not only can he not jump, but he can't begin to swing the rope. He just sort of spasms, and giggles about it. Lily is more interested in lying on the exercise mat and doing "crunches". Or something. She makes a big show about sitting down, and then lifts her legs in the air over and over. Sometimes she gets up and sits back down again to start over, for good measure.

Lily has been very interested in identifying emotions these days, particularly "happy" and "sad". Recently Noah's Elmo cup has had to go to time out during dinner, since he keeps sticking his fork into the straw. One of these times, I pointed to Elmo on the cup and said, "Look--you made Elmo sad, because he's in time out." Both kids stared doubtfully at the obvious grin on Elmo's face, and Lily protested, "Ehmo 'appy!"

She looked at me, then at Elmo. Then she blew a kiss toward the cup and said, "Ehmo 'appy!"

At bedtime, Noah and Lily wear pull-ups. Noah's have two varieties based on the movie Cars--one just has Lightning McQueen, and one has both McQueen and 'Mater the tow truck. Owing, I suppose, to his love of trucks, he refuses to wear the ones that only have a car on them. Since we have about 30 of them, I keep trying to trick him into wearing them by just having him put a pair on without pointing out the picture. He is ever-vigilant though, and always checks for the requisite truck. If there is only a car, he says "Uh-oh!" very importantly, like he's discovered some huge oversight. Then he runs to the drawer of pull-ups and rummages around until he finds the kind he wants. "There!" he says, very satisfied with himself for having corrected such a terrible error.

Tonight we played outside after dinner until bath time. Lily wet her pants just before we came inside, so we took them off when we came in. I then announced that it was time to take a bath, and Lily went running off in the direction of the bathroom with more than the usual excitement.

A minute later, as I was trying to herd Noah toward the tub as well, I heard anguished cries coming from down the hall. I went to the bathroom, which was dark, and flipped on the light. The ensuing sight was a bit of a shock--Lily had bent herself headfirst into the tub and gotten stuck. Her feet dangled barely off the floor, with her bare bottom (etc.) in prominent view. I had to leave her there long enough to run and grab the camera, even though I obviously can't share the picture outside the immediate family! She's going to hate me for that one in a few years...
Posted by Hewittfolks at 9:15 PM No comments:

at the jumping-off place

Well, it's official. We are moving to Bastrop.

It sounds sudden when I put it like that, but it's been in the works at some level for a long time. When Scott and I first got married, we planned and daydreamed where we might settle down someday, and Bastrop was on our short list. It's half an hour outside of Austin, in the middle of a randomly beautiful piece of Texas covered with hills and pine trees. It's decently close to Scott's parents, and it's close enough to Austin that Scott can attend trainings and possibly move into a different position in DPS without relocating the family.


So it's been in the plans for a while. Choosing the timing has been a bit tricky, but the plain truth is that we're outgrowing our house. We're going to have to upsize before too long anyway.


And there it is. I can tell you the reasons why. I can spell them out logically, and it all makes sense.


And in the grander scheme of things, I'm happy and excited. But in the day-to-day steps of making it all happen, our lofty goals are foggy and unclear in my view. The future is out there, but I don't know what it looks like. Much more real are the steps of extricating myself from the life we've built here. Getting our house ready to sell. Looking for a new job. Pulling those lofty reasons back out of the fog to show them to our friends and explain why we're leaving, over and over and over again. It makes me tired and it feels strange. Sometimes, like right now I find myself waiting to wake up from this weird dream. (Denial beats keeping my house squeaky-clean for showings, anyway.)


Ah, I probably sound depressed. I'm not. This move is something we've worked for, prayed about, and looked forward to for a long time. But "someday" and "today" are two very different things, and I'm not always the greatest with change. (Last night I realized that one of the "newer" t-shirts in my pajama rotation is 12 years old.) And beyond just change, uncertainty is pretty much terrible. I like being able to think a couple months ahead and know approximately what the horizon will look like. Once time passes and a few more things get figured out, I'll be able to rest a bit easier. Until then, I just need to have a little patience and a little faith.
Posted by Hewittfolks at 11:21 PM 1 comment: