It is not a new discovery to me that my babies love watching TV. From the time they could drag their noggins on their tiny wobbly necks, they would defy the non-TV-facing positions we placed them in to turn toward the screen. But since the prevailing wisdom is that television is Evil for babies, we haven't exactly been indulging their interest.

I've been working on trying to teach some sign language to Noah and Lily. (Twins can be somewhat delayed in language acquisition, so I'm hoping the signing helps make up for some of that.) So far, it has been completely unrewarding. A typical example: Noah will sit in his high chair, yelling and banging his tray loudly with both hands. Instead of running for the cereal and fruit as I would typically do, I go to Noah and touch my hand to my mouth several times, saying, "Eat? Eat?" He briefly stops yelling, shoots me a look that clearly says, "Are you NUTS, lady? Can't you hear me?" and then resumes his noise with vigor.


Anyway, as part of our sign language education, I thought I'd see if the babies would enjoy the Baby Einstien DVD of signs. They do. VERY much. Noah doesn't quite have the attention span to sit and watch the whole thing (it's half an hour long) without needing to wiggle and play, but he still liked it. Lily, on the other hand, sat COMPLETELY enraptured the entire time. Especially during the segments with puppets, such as this guy: 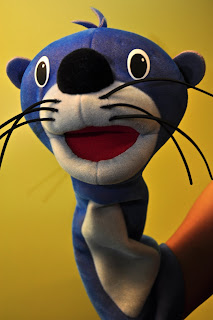 Me, I think he's kinda creepy looking. Lily thought he was the best thing since sliced bread. (And since she's never actually had sliced bread... probably the best thing, period.) Every time they had a puppet segment, her cute little jaw would drop open, she would stare, and SQUEAL and flap her arms! I've never seen her act like that before. Possibly I will see that behavior again when she is in middle school around boys. I'm going to hope she doesn't develop feelings for furry blue otters.

Anyway, following that glowing review, I have sanctioned the occasional use of baby-appropriate TV for educational purposes, and in extreme circumstances. Such as when it's too late for a nap and too early for bed, and Mommy still hasn't grown that third arm for holding cranky babies. I have begun looking for other Baby Einstein DVDs, because I think I'm going to get tired of this one fairly quickly.

I just hope they all have blue otters...

Posted by Hewittfolks at 9:33 PM 2 comments:

what's in a name?

I know it doesn't mean anything, really. Just some consonant and vowel sounds that babies have to learn to make before they can talk.

So why did it almost make me cry when she said "Mmm-ma"?
Posted by Hewittfolks at 7:05 PM 1 comment:

a touch of the yuckies

This past week, it would be "Mommy's discovery of the difference between spit-up and throw-up".

As it happens, there is a big difference.

Sparing everyone most of the gory details, Noah and Lily caught a bit of a stomach bug last weekend. Noah got over it very quickly, but Lily continued to randomly reject some of her meals throughout the week. (In case you're interested, cranberry-raspberry applesauce looks rather fuchsia afer its upward journey.)

But they're doing better now. They even felt up to the challenge of a chilly walk in their fun fleece hats: 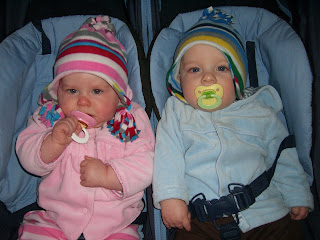 For the remainder of this entry, I thought I'd share a small slice of my Life With Scott. It never ceases to amuse me that he appears so straight-laced and sedate to most people... but he's not. Those of us who read his facebook status updates found this out long ago. I love the way he thinks--I don't understand, it, but I love it.

For example, one day I came home and found this: 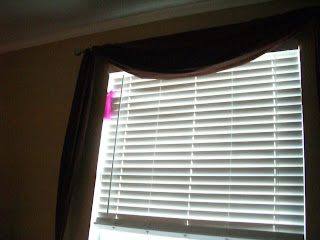 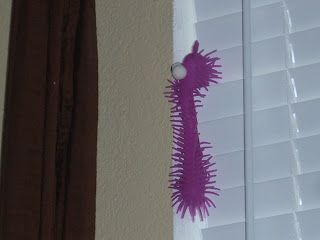 That's not a living creature, in case you were worried. It's a rubbery toy. I couldn't wait to hear what crazy reason Scott had for having the toy climb the side of the window... As it turned out though, he was just using it to squish the blinds over and help block the afternoon sun.
I found this about a week ago: 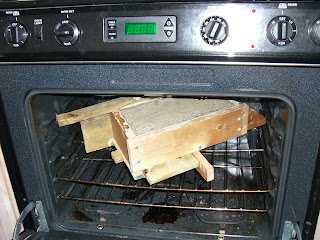 Yes, that's my oven, and no, that's not edible. It's a wooden mold filled with concrete. Yes, in my oven. In the kitchen. The one I cook food in.
Now, I have to say that the concrete was for a good purpose: Scott was making a base for a gate fastener, and it works wonderfully.
But still--it did give me a bit of a shock when I opened the oven door...

Posted by Hewittfolks at 8:46 PM 2 comments:

I feel like it has been a looooong time since I've updated. And it's been over two weeks, so I suppose it has been quite a little while. I think I've hit one of those points where I feel like there's not anything exciting enough to worry about sharing with the general populace. But I think that's some sort of denial, because when I get down to actually summarizing the past several days... it is a daunting prospect, indeed.
FIRST of all, I am an aunt!! Scott's brother Brad and his wife Becca were expecting a baby boy at the end of January, but he decided to make an appearance a month early. His name is Elijah James Hewitt. 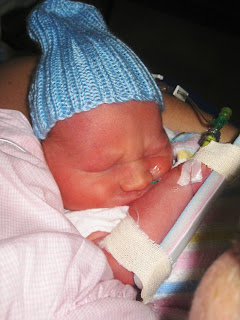 He had to stay in the hospital for several days while he adjusted to life on the outside, but he's doing great now. The scariest part to me was the fact that without warning, Becca's water broke and by the time they got to the hospital, they had to immediately do a c-section because he was ready to come out, hindquarters-first. It's amazing how much can happen in an hour and a half! Thankfully, everyone is fine and home. They are staying in Australia for another month or so, and then they come back to Texas for awhile before heading to a new home in Mexico. 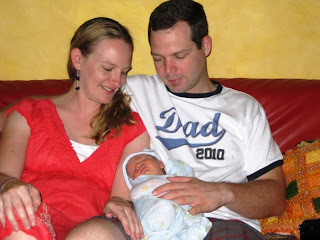 Then, my mom came to visit for a week. We had a great time, of course. The photographic highlight was our trip to the zoo with the babies. (My brother Michael got us a much-appreciated season pass to the zoo, so it will definitely NOT be our last trip!) Apparently not a lot of people wake up on Monday mornings in January and think, "Hey, we should go to the zoo!" We saw maybe a dozen other visitors the whole time, and a lot of attractions were closed!
Also, as a side commentary: Why aren't zoo exhibits more short-people friendly? At every cool little animal enclosure we got to, I would try to get the babies to look at whatever animal was there. But I would usually realize that, no matter how obvious and cooperative the animals were being, the only view my kiddos were getting was a fence rail or an iron bar. At this point, they don't know enough to care--they're equally impressed with lions as with plant life.
But aside from viewing issues, it was a nice day and we had a good time. 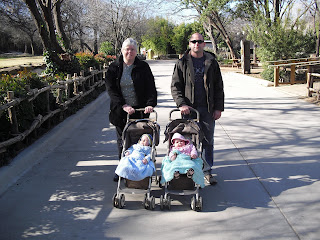 The best part was the parakeet house, where you go into this aviary-thing where a few hundred parakeets and cockatiels are flying around. They sell sticks covered with honey and seeds that you can hold to attract the birds. Noah and Lily LOVED them. 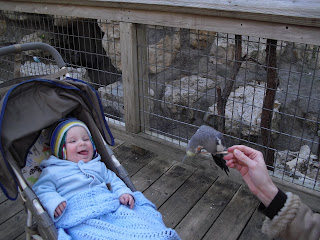 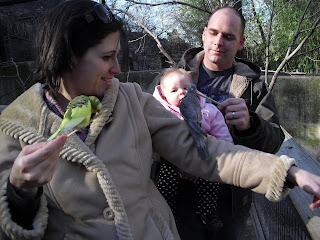 Oh yeah, and I got a haircut. It is short.

In other baby-related news, Noah and Lily have been on the outside of me almost as long as they were on the inside of me. As much as they have changed in the past almost-eight months, it is still incredible to me to think that the same amount of time previously took them from nonexistence to beautiful newborns.

Currently, we still have no baby teeth to speak of, but Noah is trying to change that. He's got a little bump on his lower gum that's gradually getting harder and whiter. It hasn't seemed to bother him too much except for some occasional fussiness. Ironically, it's Lily who's figured out how to "chew" her food. So she'll be well-prepared, I suppose... assuming she will ever HAVE teeth. Seriously, how many babies make it to eight months without even the shadow of a tooth? I was four months old when I got my first one. She's still going to be teething when she goes to kindergarten.

Posted by Hewittfolks at 8:57 PM 3 comments: