So here are some pictures of our early Thanksgiving weekend with Scott's family... 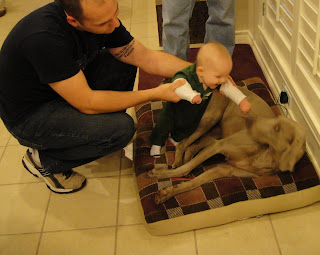 Gemma and Grandad with the babies. 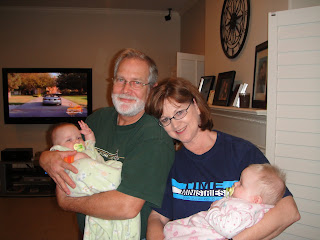 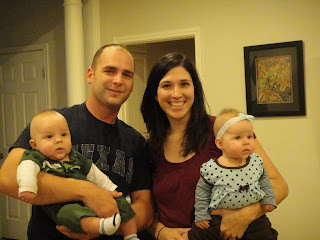 Brad and Becca borrowing the babies for a picture... 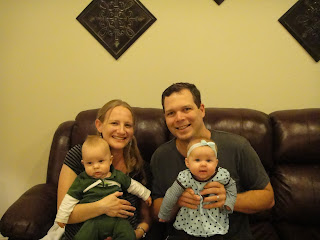 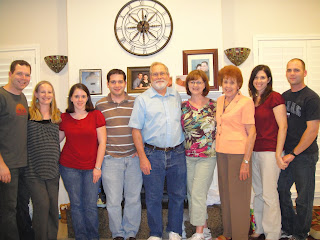 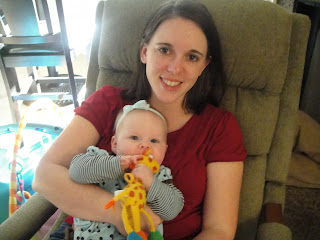 I thought the babies could have their own "Thanksgiving dinner" while the rest of the family ate, so I brought jars of sweet potatoes and turkey. Noah liked it okay... Lily, not so much. 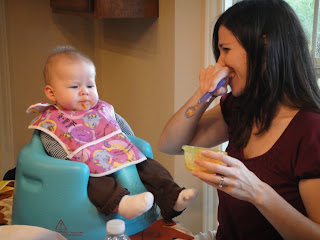 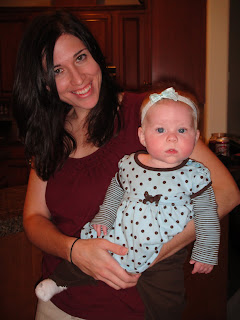 Posted by Hewittfolks at 10:36 PM No comments:

Six months ago, my babies were fetuses. Six months from now, they will no longer be infants.

As much as it seems like my life has been consumed by babies forever, this whole thing is going way too stinking fast. In the past several days, Noah has developed about 28 new facial expressions. He now has a consonant sound: "b", and babbles it all. the. time. He now rolls over CONSTANTLY in his sleep, and wakes up very confused as to who put him on his tummy. Lily deftly pulled off her socks today to play with her toes. Her hair is getting so long that she always looks like some sort of mad scientist with a flyaway 'do. Her favorite thing lately is the Grabbing Faces Game, which she pretty much never stops playing.

Our little fam just spent Thanksgiving #1 with Scott's family in Beeville. Brad and Becca are in Texas for awhile on their way to Australia, so we took advantage of the opportunity to celebrate with the family a little early. They're taking off soon for Becca's home country before their baby boy is born in a couple of months. We had a good time catching up with family and consuming ridiculous amounts of food.

On a related note, babies love routines. Need routines. Especially Lily. We have been traveling for the past 4 days, and missing our normal sights, sounds, and timelines. So either due to that, or because she experienced her first ear infection (and subsequent diarrhea-inducing antibiotics) over the past week, Miss Lillian hasn't been herself lately. Fussy, uncomfortable, not sleeping well, not laughing or smiling as much... it makes a mommy sad. So we finally got home this afternoon after a 6 1/2 hour journey. I almost breathed a sigh of relief, until I realized that tomorrow they have their 6 month checkup... and shots. And then the day after that, MY family will be rolling into town for OUR Thanksgiving. Holidays are wonderful and I love spending time with family... I don't like that there's a part of me that's starting to dread times like this, wanting to run away with my babies and protect them from anything that might disrupt their little lives. I want them to learn to be flexible and resilient, and the only way to do that is to let them experience things and learn to bounce back. But it's hard. Good thing it'll only get easier for me to control, protect, and manage their lives...

Okay, enough of that. (Have I mentioned that they are growing up too fast?) Now is when I would post pictures, except that I have tried twice and apparently the ever-capricious internet is refusing my attempts. I'll try again tomorrow...
Posted by Hewittfolks at 9:38 PM 1 comment:

So, Mommy's been a slacker in the visual media department lately. In my defense, though, I truly believe that time has speeded up lately. Take my last post, for example: It's only been about 3 days since I posted, and yet the dates say it's been over a week! Something has gone awry in the space-time continuum.

Anyway, I am catching up. This is mostly a collection of pictures and a couple videos, so to those of you who yawn a bit when I get long-winded, Happy Birthday. I'm not feeling verbose tonight.

Here are Halloween babies (Thing 1 and Thing 2) ready to dispense candy to the masses. (They are clearly unaware of the deliciousness of chocolate and chewy sugar, being so ready to give it all away!) 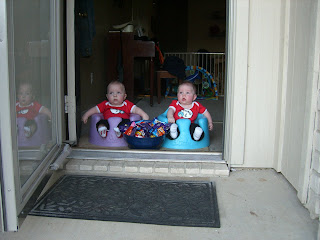 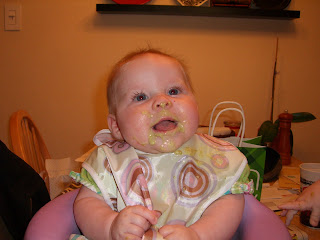 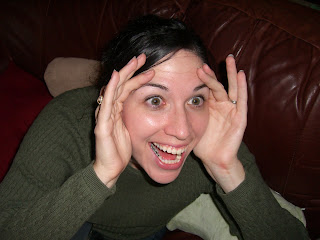 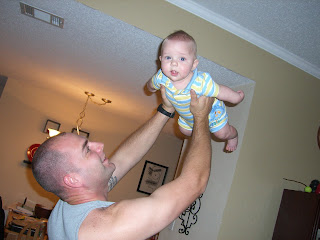 Lily has a great passion for sucking on things--she took to a pacifier from birth. Lately, though, she has her hand shoved in her mouth more often than not. A couple of times, it's been like this, just like Daddy used to suck on his fingers when he was little: 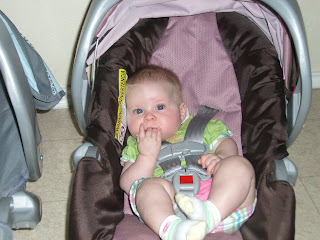 The view from our back porch on Diaper Day: 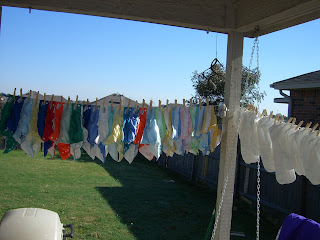 Could he GET cuter? 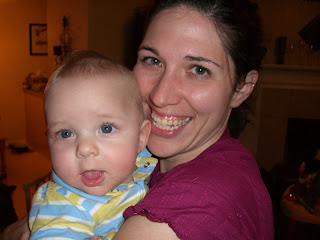 These are Texas babies, after all... 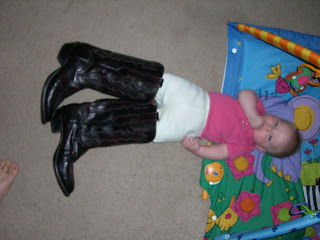 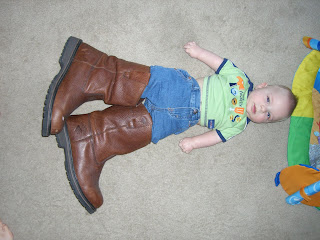 The kiddos enjoy sitting in front of the front door lately, can you tell? 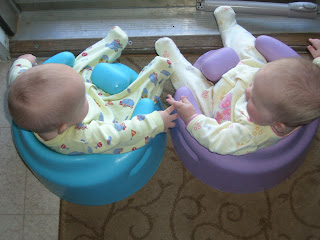 ...and now on to some video footage. Scott caught Lily blowing raspberries for the firsts time yesterday, and managed to catch it on camera. Believe it or not, it's a developmental milestone to blow raspberries! Lily isn't too happy about it, though...
People are always asking me about how the babies interact, since they're twins and all. I'm sorry to say that our kiddos do not show any of the touted benefits of twindom, such as being calmed by each other's presence, reading each other's thoughts, tandem telekinesis, or whatever else twins may be purported to do. They do acknowledge each other's presence, and could be construed to "play" with each other, if you're imaginative. Here they are:
Posted by Hewittfolks at 7:46 PM 3 comments:

a day in the life

For better or worse, a fairly predictable routine has been a part of our daily lives for a long time. Well, I guess you could call it "long" --for most of the babies' lives, anyway. It's evolved a bit over time, so I thought I might record it the way it stands right now. Both for the sake of curious and bored readers, as well as for my own gratification when things (so they promise me) get easier.

Here is a typical day when I am home with kiddos: 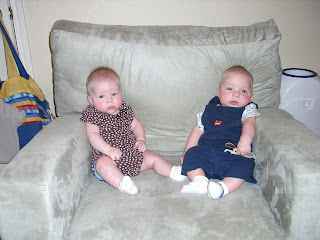 Posted by Hewittfolks at 4:20 PM 4 comments:

First of all, let's just get it on the table: When you take your 8-month-old trick-or-treating, you're not fooling anybody. I don't care how cute her little doggie costume is, everybody knows the candy's going to be for you. So unless you're actually willing to let your infant gum her way through a pile of Snickers and Tootsie Rolls, just let the farce go. You're a big girl--go to Wal-Mart and get yourself a nice big bag of candy and just eat it all yourself. You can even toss it into a plastic pumpkin first if it makes you happy.

Secondly, it is never okay to ask if you can hold a stranger's baby.* It's just not. Especially not while you're trick-or-treating and your judgment has already been called into question for the reason described above. Not even if you say, "I have a baby too!" What sort of ridiculous reason is that for me to let you hold my child? During flu season?! Go hold your own baby, then, and quit pushing her around in a stroller while you beg candy from your neighbors.

*I suppose, in the interest of full disclosure, that there are SOME instances in which it is okay to hold a stranger's baby. Like if somehow you witness someone toss their baby into the air as they fall down three flights of stairs--I think in that case they would be glad for you to catch their child. You might not even need to ask.
Posted by Hewittfolks at 2:55 PM 2 comments: