Well, it has happened. I have passed a threshold, crossed a bridge.

I expected it to happen before this, really. Talked to other parents who'd been through it before, and knew my day would come. Expected it. Feared it.

Today, Noah woke up from his nap and started to cry and fuss in his usual way. Sometimes he falls back asleep though, so I wasn't in a hurry to go get him. But after a few minutes his cry reached a desperation pitch and I knew naptime was officially over. So I went in to get him out of his tent--a pack-n-play sort of thing that's a lot less headache than an actual pack-n-play.

As I went in, I realized that Noah was trying to say something. Boo-boo? How did he get a boo-boo? I could see his tear-streaked face pushing through the mesh of the tent. So I unzipped it.

The situation dawned on me in pieces. First, I realized his diaper was babyless, lying on the tent mattress. Was he trying to say "diaper"? He kept crying, and I still thought he might be hurt.

Until I saw his hand, clutching a rather large (and luckily, rather solid) turd. He was holding his poop in his hand. He was saying "poo-poo", not "boo-boo"! I ALMOST almost took a picture of him sitting there, crying pathetically, clutching his poo. But finding the camera was a tall order when I was laughing too hard to see straight anyway.

I gingerly helped him down, helped him throw his creation in the toilet, and we both scrubbed our hands thoroughly. Then, realizing that he had residue all over his bottom and legs, I decided that a bath was in order and plunked him directly into the tub. Somehow even though I was being careful. I still managed to get poo on both my pants and shirt.

I'm not sure how he didn't make an even bigger mess--there was some poo on the sheet, but none on his pillow or the insides of the tent! Mommy's learned her lesson though, and never again will Noah take a nap without pants.
Posted by Hewittfolks at 4:17 PM 3 comments:

It's one of those times when I feel I should chronicle some things. Not because I don't have enough to do or because it's anything exciting enough to share, but a monthish has passed in a blur and I really want to figure out where it went. So let's see, what have we been up to...

1. We lived through horrible winter weather. Superbowl week will now forever remind me of nasty ice and freezing winds. On the night of Monday, January 31, the temperatures dropped dramatically and freezing rain began falling. By the end of things, about an inch of ice and a couple inches of snow covered everything in sight. School was closed for four days, because the weather stayed below freezing and there weren't enough ice and salt trucks to make it around to everyone. It was the coldest weather northern Texas has seen in 15 years, the news said.

What made it even more exciting was that our power (including our heat and hot water) went out. For nine hours one day, and four hours the next. Our firewood was outside, frozen solidly to the ground. Our kitchen pipes froze for 2 days. Oh, and Scott was working 13+ hours a day in Arlington to deal with the Superbowl traffic. Thankfully, the roads started clearing enough for us to leave a little and the power came back on for the nighttime... but it was still a long, long day.

In lighter news, the kiddos braved the zero-degree windchill to play in the snow for about 5 minutes. Lily was pretty cool with it. Here she is trying to climb up the slide that had about 3 inches of solid snow and ice packed onto it: 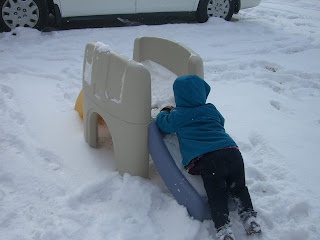 Noah was not as convinced that snow and cold are good things. Perhaps he was mourning the absence of his missing tiger mitten... 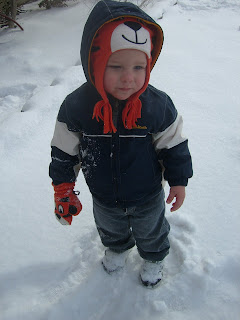 2. We have been sick. Nothing major, but what I thought was going to be a fairly forgiving cold season has turned out to be kind of horrible. From mid-December through Valentine's Day, it was hard to tell where one cold stopped and the next one started. Next year I'm buying stock in Kleenex. The twins are so used to having their little snotmakers wiped that they'll attempt to blow their nose on anything resembling a tissue. I turned around one day to see them raiding the napkins... 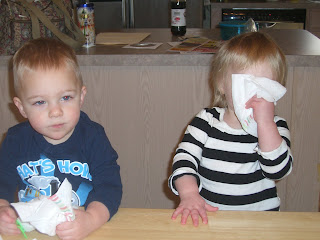 3. We went to Bastrop. Literally just a few days after the horribly cold temperatures, things warmed up to the 70s. We spent the weekend at the cabin in Bastrop with Brad, Becca, and Elijah, with a visit from Gemma and Granddad. 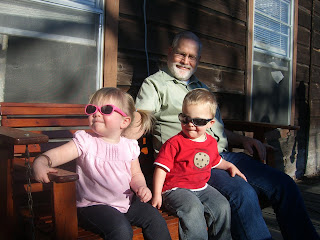 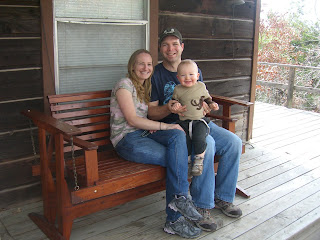 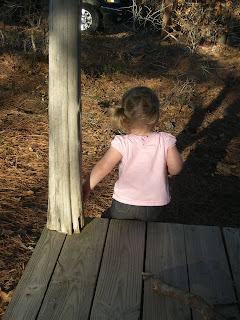 4. Lily got her first (semi-) black eye. It was very un-dramatic though. She was climbing up on some playground equipment, stumbled, and fell about 12 inches into a metal bar. It's hard to tell in the pictures, but it looked pretty spectacular for awhile. 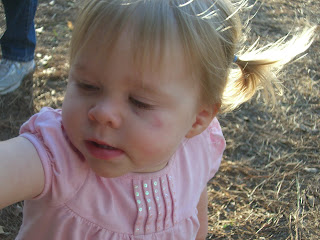 5. We have enjoyed more warm weather. And especially after that terrible cold week at the end of winter, it's been just incredible to spend a lot of time outdoors. Noah and Lily LOVE being outside (as most kids do) and they can be happy doing just about anything. Their sidewalk chalk skills are a little better developed this year: 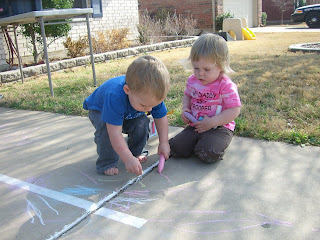 Noah was very concerned about the broken pieces of chalk. He also thinks that everything pink is "Nee-nee's" 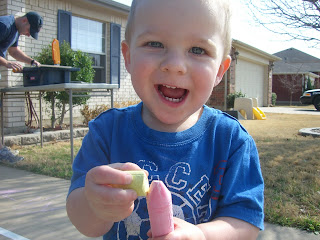 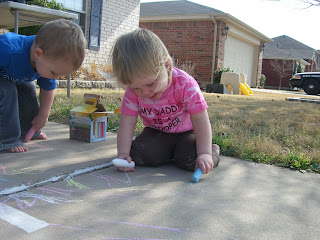 6. We are putting down tile. What an undertaking! Scott is doing most/all of the actual tile-laying work, but I feel like I've been running a marathon for the past few days too. We're tiling about 2/3 of our house, including the living room/entry, kitchen, hallway, and bathrooms. That's pretty much everywhere we go all day, so there's a lot of furniture to move. And with little (hyperactive, defiant) toddlers, you can't just pile all the furniture in the other rooms and expect them to be happy twiddling their thumbs in their cribs all day. (But wow, wouldn't that be nice?!) So I've been busy organizing, cleaning, and rearranging our "office" into a play room area. We've always stuck everything in the office that we didn't want to deal with, so to tackle a whole roomful of procrastination was ... well, not fun. I pretty much stink at organizing and cleaning things out, so it was kind of torturous. But it is done and the kids have had a place to play as the rest of the house has been uprooted. And looking at all the hard work Scott has had to put in so far, I still feel like I've come out ahead... :)


Posted by Hewittfolks at 7:44 PM No comments: