Word has reached me from afar that I have been lax in posting. And I knew that, but when my mother-in-law brings me word from six hours away that her coworkers have been wondering if things are okay, then I suppose it's time to update! Rest assured that I still have all my fingers and that my children are still doing adorable things. If they would do those adorable things a little bit slower, I might take time to breathe and post a little more often. 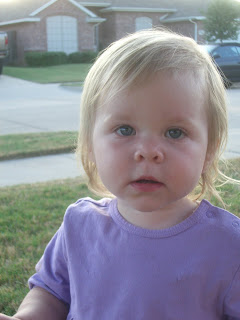 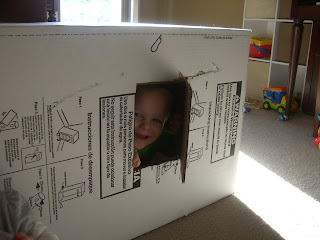 Noah and Lily are almost eighteen months old. A year and a half!! Unbelievable. Every week they develop new aspects to their personalities and seem more and more grown up all the time. Some developments:

In recent photographic history, we enjoyed a visit from Grandpa and Grandma in mid-October, dressed up and went trick-or-treating for Halloween, and are currently hosting Gemma and Granddad for a couple of days. In recent un-photographic history, Scott has been out of town for trainings for about four weeks out of the past month and a half, so we're glad he's done with those for a while. As for me, I finally took the EPPP, the beastly licensing exam for psychologists. And I passed! So now the only things I need to do are to pass the oral exam, finish my postdoctoral supervision, and pay the state of Texas a lot of money, and I will finally finally FINALLY be a psychologist! 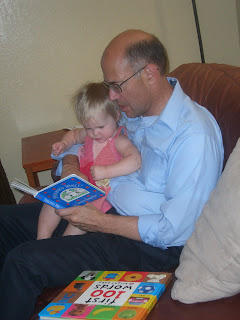 Here's Noah with his (tiny) pumpkin. We let the babies choose their own, and I'm pretty sure he found the smallest one there. (I think he thought it was a ball, because he kept throwing it...) 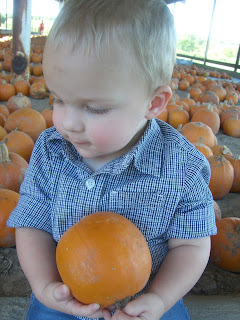 Lily was less content to pose with her chosen veggie. I had to catch a shot of her as she attempted to climb off the wall. 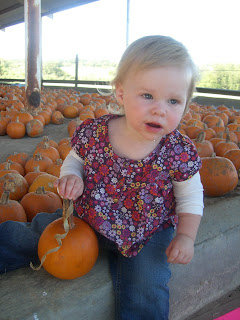 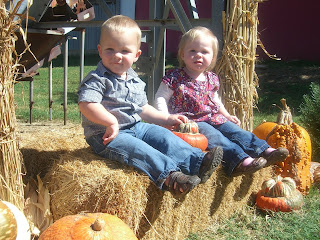 Grandma with her grandbabies. Not sure what they're looking at, but it's not the camera. 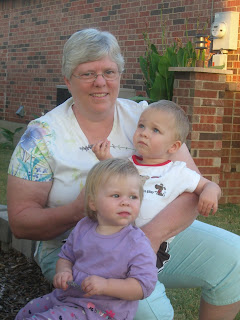 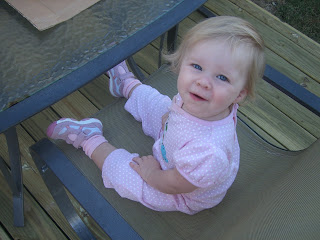 Here we are carving the (tiny) pumpkins on Halloween. This task was made more frustrating by the fact that I had kept them in the back of the fridge since our pumpkin patch day to keep them nice. But the back of our fridge freezes things. In case you're wondering, I don't recommend trying to carve tiny frozen pumpkins. Also, this picture is misleading: the babies didn't help carve pumpkins. They just kept trying to eat the seeds. 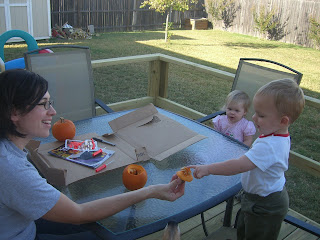 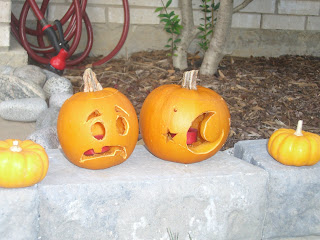 Here's their Halloween costumes, although they looked cuter in person. Lily was Dorothy, and Noah was the cowardly lion. Which was fitting, because he was afraid of the costume for weeks. Oliver was Toto, but he had to play his role from inside our house, because he is insane and tries to kill other dogs with his high-pitched yelps of death.

And Scott dressed as himself. Note the dark colors and law enforcement t-shirt... he did a great impersonation! 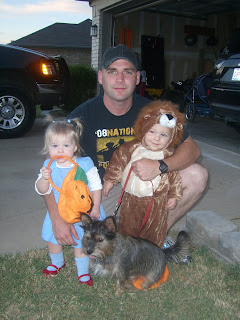 My first kid-to-Mommy flowers. Now I just need a vase... 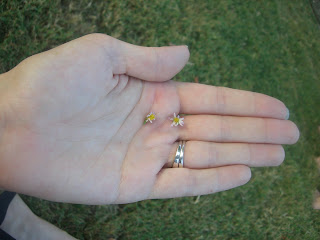 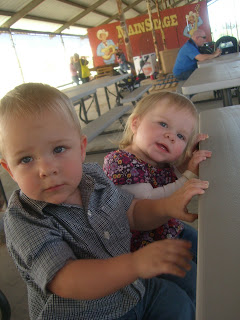